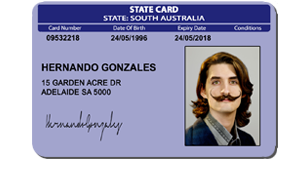 A ‘fake ID’ is one that does not belong to you, been illegally made to look like a real ID or been altered or scratched in some way to make you look older.

In South Australia, proof of age can be evidenced by a driver’s license (from SA or interstate), a proof of age card (from SA or interstate), a passport (from any country) or a photographic ‘Keypass’ card. It is against the law to use falsified forms of identification, which includes: using a fake ID (to obtain alcohol, enter a bar or club or purchase cigarettes), allow another to use your ID, make a fake ID or lie or give false information to obtain an ID. If you are caught doing any of the aforementioned activities, and are under the age of 18, you can:

If Caught by Police:

If it is your first time getting in trouble with the police, you will generally be issued a formal or informal caution. However, this is not always the case. It is important to remember that it is also against the law to not provide the police your name, address and date of birth. If the police suspect you are under the age of 18, and you do not give them your details, then you can be fined a maximum of $1,250.00. Whilst the staff of a hotel, club or bar cannot confiscate your ID, if it is suspected you are under the age of 18 years and refuse to leave the premises, then they are entitled to hold your ID until police come.

Lending ID to Someone Else:

It is illegal to make or facilitate the making of false IDs. There are many things that constitute the ‘making’ of a fake ID, which include: scratching, changing or forging an ID. South Australian laws are extremely strict about making falsified driver’ licenses. If a person is caught with a scratched driver’s license, then that person can either be given a formal caution or charged with a crime and fined up to $2,500.00 if found guilty by a Court. Similarly, it is against the law to lie about your age when applying for a driver’s license or proof of age card. If you are caught doing this and are under the age of 18, you can again be charged with a formal caution or be fined up to $2,500.00 if found guilty by a Court.

This article describes the law in relation to fake identification cards in South Australia. The law may differ if you are in a different State or Territory of Australia.